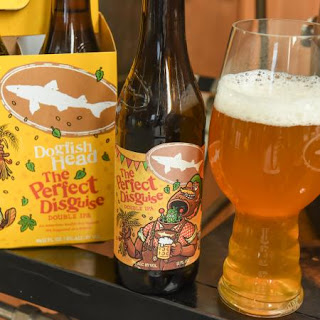 Dogfish Head The Perfect Disguise Double IPA...$13.99 / 6pk
Is it an IPA disguised as a Kölsch or a Kölsch disguised as an IPA?
On the surface, The Perfect Disguise looks like a straightforward Kölsch with a crisp Kölsch yeast and traditional German malts and hops … but things aren’t always what they seem. With a quick sniff and a slight sip, you’re greeted by a creamy mouthfeel and full body thanks to the addition of a unique German chit malt - the first hint that this beer may be somewhat different.

Hiding deeper behind that German disguise is the double dry-hopping of an American Double IPA, with nearly 4 lbs. of German and American hops per barrel. It brings tropical flavors of citrus, tangerine, mango, gooseberries and peach.

The artwork for The Perfect Disguise was brought to life and designed by 2019 Off-Centered Art Series artist Michael Hacker. The name ‘The Perfect Disguise’ was the inspiration for the illustration design as it’s a play on words with whether or not the beer is actually a Kölsch or an American IPA.
Posted by Paul Hayden at 4:03 PM