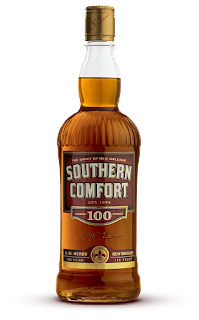 Back to a whiskey base instead of neutral grain spirits

New York Times
Surprise! Southern Comfort Has No Whiskey. But Soon It Will.
By Robert Simonson
May 8, 2017
When the Sazerac Company bought Southern Comfort from the liquor conglomerate Brown-Forman last year, the business motivation was clear.
“If you and I ended on a desert island and there was a bottle of liquor, there’s an even-money chance it would be Southern Comfort,” Mark Brown, the chief executive of Sazerac, said in a phone interview.

Very likely. But it’s also a 50-50 proposition whether any castaway would actually drink it. Southern Comfort has long borne a double-edged reputation as being both famous and infamous.

The blend of spirits and fruit and spice flavorings is a storied brand, with roots that are believed to go back to the 19th century, and it can be found in nearly every bar in America. Yet it is widely regarded as the drink of unwise youths and undiscriminating palates. The last time it was cool may have been when Janis Joplin made a show of swigging it day and night. (The company thanked her for the free advertising by giving her a fur coat.)

Kevin Richards, the new senior marketing director for Southern Comfort, admitted as much, saying that when Sazerac bought it, the brand was “in danger of losing a lot of relevance in the mind of consumers.”

Sazerac hopes to reverse that. A new-and-improved Southern Comfort will hit the shelves in July, with a redesigned label and bottle. Flavored versions like Lime Comfort and Caramel Comfort will be phased out.

But, most important, Southern Comfort will get back the one ingredient that many people have long assumed it contained: whiskey.

Once upon a time, Southern Comfort did include whiskey, though the complete formula has always been kept a secret. It was created by Martin W. Heron, purportedly while working at a New Orleans saloon. Over the years, it made hay out of slogans like “None Genuine but Mine” and “the Grand Old Drink of the South.” In 1939, in conjunction with the release of the film “Gone With the Wind,” the company promoted the Scarlett O’Hara cocktail, made of the liqueur, cranberry juice and lime juice.

But by the time Brown-Forman bought the brand in 1979, the kick inside the bottle was provided not by whiskey, but by grain neutral spirit — basically a generic alcohol free of character, not unlike vodka.

“I remember having arguments with bartenders who thought black was blue and swore it had whiskey in it,” Mr. Brown said. “We thought, as part of the overall positioning, we would put whiskey in it. And we have.”

Mr. Brown declined to disclose which whiskeys were being used, but said they were all drawn from Sazerac’s stocks of North American whiskey. In addition to the existing 70-proof and 100-proof versions, the company will introduce an 80-proof Southern Comfort that is considerably more whiskey-forward. Sazerac is also working on other whiskey-focused renditions, including Southern Comfort Rye and Southern Comfort Barrel Select.

Sazerac thinks that the drink’s future depends on consumers’ thinking “whiskey” and not “liqueur” when they buy or order it. “For us, whiskey is the root of the brand and we’re going to embrace that, and not play in that liqueur space,” Mr. Richards said.

Sazerac has even played a subtle mind game in giving the 80-proof version a black label, a color favored by another famous whiskey. “If we’re right between Jack Daniel’s and Jim Beam on the shelf,” Mr. Brown said, “that will be fine with us.”
Posted by Paul Hayden at 8:47 AM