SweetWater in stock and now online 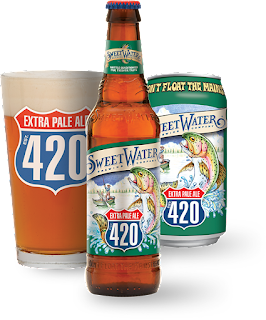 SweetWater 420 Pale Ale...$8.99 / 6pk
Dry Hopped with a fat stash of Cascade hops.
Our most popular brew! A tasty West Coast style Extra Pale Ale accentuated with a stimulating hop character. First conceived in our bat cave on 4/20, this kind of beer keeps the wheels on the bus going round and round!
SweetWater IPA...$8.99 / 6pk
"A hophead's beery dream" - Beer Advocate
This mammoth IPA is defined by generous quantities of juicy American hops. The extensive dry hopping process contributes to its bright and flavorful character. This beer is unfiltered to leave all the natural flavors intact and bottle conditioned to stay super fresh.

SweetWater Hop Hash IPA...$16.99 / 15pk CANS
Hop Hash Easy IPA
Keep on Keepin' On.
We kept the malt bill light to allow the hops to shine through. We dosed this sucker with a boatload of Amarillo Hop Hash. Pungent with floral, tropical citrus fruit flavors, and the hop hash gives it that one of a kind chewy, gooey, resiny mouthfeel. As the chaser, we are giving it a hefty dry hop to enhance the potent aromas. Ahtanum gives it orange and grapefruit tones, Crystal for a little kick of spiciness, and El Dorado bringing some pear and watermelon characteristics.
Posted by Paul Hayden at 1:38 PM