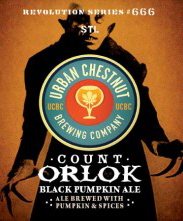 Urban Chestnut Count Orlok Black Pumpkin Ale...$8.99 / 4pk pints
Count Orlok Black Pumpkin Ale – That’s right (again)! For the first time ever (again), Urban Chestnut is brewing a pumpkin beer and while it is officially a Revolution Series beer, it does have a little German flare- Nosferatu (Bird of Death), aka Count Orlok was THE German Count Dracula. He was a blood-sucking vampire… but being German he must’ve enjoyed beer too, right? We believe it is so and thus have created a Black Pumpkin Wheat Ale in his honor… a bier noir if you will