Rock Town Arkansas Bourbon Whiskey....$35.99
Compare to $38.99 at Total Wine and More
Our bourbon is distilled from Arkansas corn and wheat right here at the distillery in downtown Little Rock. We’re proud that we keep things local. We age our bourbon here at the distillery in small new charred oak barrels that were coopered right here in Arkansas at Gibbs Brothers Cooperage. That’s right, we use Arkansas Corn, Arkansas Wheat, we distill the whiskey in Arkansas, age it in an Arkansas made barrel to be Arkansas’ first ever Bourbon Whiskey.

Our Bourbon is milled, mashed, fermented, distilled, aged, bottled and packaged at the distillery in Little Rock. We’re makers not fakers.

Tasting notes:
A sweet and smoky perfume of roasted corn, breakfast cereal and brown sugar with delicate baked cherry notes. Smooth and sweet on the palate. Very subtle and deep notes of almond, brown sugar and freshly baked biscuits. The sweet and nutty notes linger into the finish.
92 proof / 46% ABV

Rock Town Arkansas Rye Whiskey...$46.99
Rock Town Arkansas Rye Whiskey is a premium small batch rye whiskey distilled, aged and bottled at our distillery in Little Rock, Arkansas. We take pride in the fact that we grow our own Rye in Northeast Arkansas.
As with all our whiskies, our Rye Whiskey is made from grain to glass right here at the distillery in Little Rock. We’re makers not fakers.
Beginning with batch 12 we changed the mash bill from 88% rye and 12% malted barley, to 52% rye, 38% corn and 10% malted barley. The rye grain and the corn are grown in Arkansas.

Reviews:  95.5/100 – Jim Murray’s 2017 Whisky Bible
“The nose will give any rye lover a serious hard on, as the effect of the grain is entirely maxed out, leaving the sugars to fill in the cracks only. The delivery, likewise, is so full of that grain’s unique fruity character, one can only swoon. Brilliant!”
Gold Medal 2016 San Francisco World Spirits Competition

Rock Town Hickory Smoked Whiskey...$37.99
Hickory Smoked Whiskey is distilled from Arkansas Soft Red Winter Wheat – aged in ex-Bourbon casks – with a nice light smokey taste from real Hickory.  We took American whiskey distilling techniques and melded it with Scotch whiskey aging techniques to make something pretty special, Arkansas Hickory Smoked Whiskey.  We cold smoke the wheat in our custom built hickory smoker here at the distillery, prior to milling. This infuses smoke into the grain and the flavor of the hickory carries all the way through to the distillate. As with all our whiskies, our Hickory Smoked Whiskey is made from grain to glass here at the distillery in Little Rock. We’re makers not fakers.
Tasting notes:
90/100 – 2014 Ultimate Spirits Challenge
Bright fragrances of peach nectar, smoked meat, hickory and teaberry leaves. In the mouth a gentle smokiness gives way to alluring brown sugar and ripe peach flavors. The finish lingers on the palate offering woodsy characteristics.

Rock Town Flavor Grain Series Sorghum Whiskey...$46.99
46%ABV
Bourbon is usually made with rye or wheat as the flavor grain, but we decided to try to see what contributions other grains would have and started our flavor grain series. Each bourbon was mashed and aged exactly the same with only one difference, the middle grain, the small grain or what we call “the flavor grain”. The whiskeys were made without corn, so they’re not bourbons, each with its own distinct flavor profile.
Sorghum Whiskey (purple label)
91% Arkansas Red Sorghum grain
9% malted barley 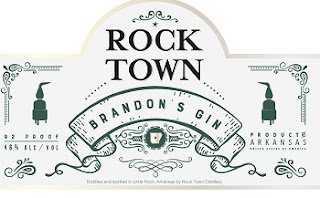