Stout time of the Year! 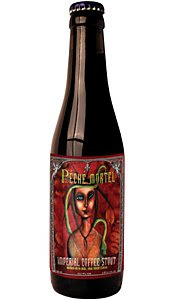 Dieu du Ciel Peche Mortel...$4.49 / 11.2oz
Rated 100/100 RateBeer
"If you love really good coffee and really good beer equally, you will be thrilled with Péché Mortel. If coffee isn’t your cup of tea, and caffeine makes you bounce off the ceiling, then just put the bottle down and find something else to drink. This beer is all about coffee. Indeed, you may have seen ‘coffee stouts’ before, but no brewer has ever married coffee and beer so naturally and seamlessly.
And this isn’t just any stout, but an imperial stout, which means that it is modeled on the strong, rich, and very complex stouts that were made in England in the 19th and early 20th centuries exclusively for shipment to Russia, where they were a special favorite at the court of the Czars.
A warning: Between the caffeine buzz, and the 9% alcohol by volume of this singular brew, you may find yourself a little disoriented. What is this, a morning pick-me-up and a drowsy night-cap, all in the same bottle? It’s just too much pleasure all at once, and that’s why the brewers named it Péché Mortel, which is French for 'Mortal Sin.' Unfortunately, we can’t say that it’s good for you. In fact, it’s a sure thing you’re going to Hell for this . . ." -- brewery 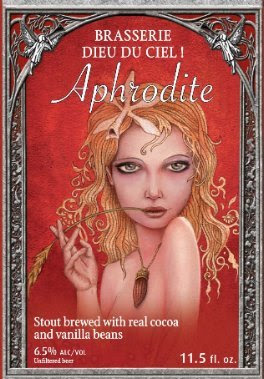 Dieu du Ciel Aphrodite...$4.49 / 11.2oz
Black ale with aromas and flavours of vanilla, dark chocolate, bourbon and roasted malt. The vanilla and cocoa marry nicely, without out-competing each other, to produce a surprisingly well balanced beer. This beer is mildly hoppy, but the cocoa introduces a touch of bitterness. Its colour may be intimidating, but it is a very smooth beer within reach of most beer drinkers. This highly appreciated dessert beer is brewed with organic fair-trade cocoa and first rate vanilla beans.
Rated 100/100 Ratebeer.com