A collaboration with SURLY!! 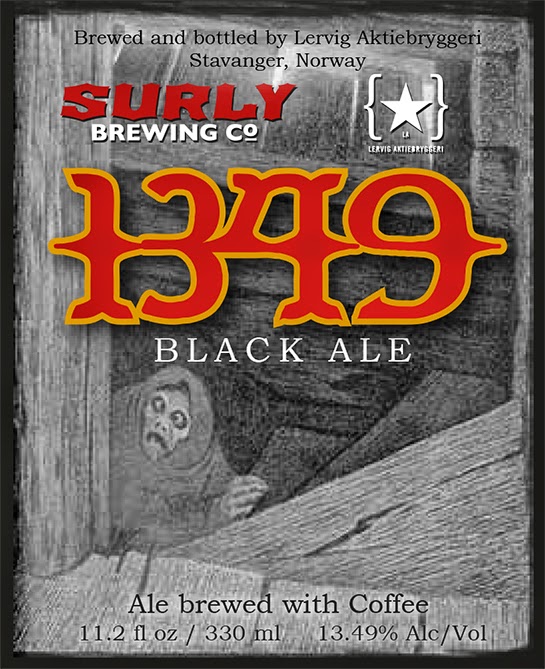 13.49% ABVIt could be said that Death Metal was born in the 14th century, when the Bubonic Plague ravaged Norway. Surely rebellious local teen lute players sang about it while drinking murky ale. And today the Black Death, stringed instruments, and dark Scandic beer are gleefully reunited, thanks to a semi-satanic alliance among Norwegian metalheads 1349, Minnesota brewery Surly, and roving American expat beer-maker Mike Murphy. The unholy seed was planted when 1349 fan Tod Haug of Surly discovered that the band members were serious craft-beer geeks. In fact, the musicians had ambitions to go beyond beer fandom, and they sought a sympathetic local brewer with whom they could collaborate to create a signature band brew. Enter Murphy, a roving zymurgist who’d recently left the Rome Brewing Company to join the Lervig Aktiebryggeri, in the Norwegian town of Stavenger. And thus, the triangle was complete. Haug, Murphy, and the 1349 guys all had a hand in creating the recipe, and all participated in the brew session.

The resultant beer, called simply 1349, is a big, black ale, fermented to … wait for it … 13.49% ABV. How much more black can you get? As Spinal Tap might say, “None … more black.” According to the lads, “The 1349 Black Ale is our Strange Old Brew; an absolutely massive beer with all the power malts, hops, and freshly ground espresso coffee has to offer, and rounded off with a distinguishable note of apocalyptic delicacy.”
Posted by Paul Hayden at 3:08 PM