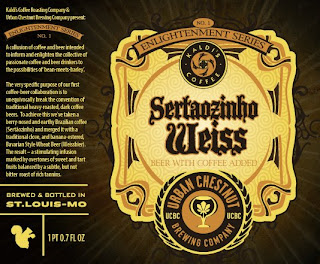 Enlightenment Series
Urban Chestnut  Kaldis Coffee Sertãozinho Weiss....$7.49 / pint
"Sertãozinho Weiss - The very specific purpose of our first coffee-bier collaboration was to unequivocally break the convention of traditional heavy-roasted, dark coffee beers. To do this we've taken a berry-nosed and earthy Brazilian coffee (Sertãozinho) and merged it with a traditional, clove and banana-estered, Bavarian Wheat Beer (Weissbier). The result – a stimulating infusion marked by overtones of sweet and tart fruit balanced by a subtle-but-not-bitter roast of rich tannins." -- label

Friday, August 17 (4pm-6pm)
Reservations are not required - but let us know your coming on Facebook

We are proud to have Florian Kuplent,  Brewmaster & Co-Founder of Urban Chestnut, along with Josh Ferguson and Tyler Zimmer, owners of Kaldi's Coffee Roasting Company at The Wine and Cheese Place on Friday August 17th from 4pm-6pm to introduce their new beer and coffee Collaboration. This is the first in the Urban Chestnut Enlightenment Series.


The tasting will include
We will also taste

More information about the project...

​Entitled the "The Enlightenment Series", this new endeavor from Kaldi's and Urban Chestnut is a collaboration between the two local artisans to purposefully create coffee beers that go beyond the traditional dark and heavy-roasted styles that are most commonly brewed.

​As the label on the bottle reads, The Enlightenment Series is "A coffee - bier collusion intended to inform and enlighten the collective of passionate coffee AND beer drinkers to the possibilities of 'bean-meets barley'."

​"Our initial intent is to create some unique beers that really accentuate the complex flavors of both the coffee bean and the intrinsic beer style. We hope to expand both the notion and the enjoyment of coffee beer." says, Florian Kuplent, Brewmaster & Co-Founder of Urban Chestnut.

​Josh Ferguson, co-owner of Kaldi's, added, "At some point, we'll certainly play around with some heavier roasts and darker beers, but just like with craft beer there's a lot of taste complexity in a coffee bean that many people have yet to discover.  The first beer in our series demonstrates this perfectly."

​The first beer in the series is a blend of a Brazilian coffee, Sertãozinho, and a traditional Bavarian Weissbier.  The end product is a complexly flavored, lighter-bodied beer with subtle notes of fruit and coffee.


Urban Chestnut Brewing Company (UCBC) is an unconventional-minded yet tradition-oriented brewer of craft beer. Founded in early 2011 and located at 3229 Washington Avenue in the Midtown Alley are of St. Louis,it brews both small batches of artisanal, modern American beers (their Revolution series) and classically-crafted European styles (their Reverence series).  The founders are Florian Kuplent and David Wolfe.  Kuplent is a German born and trained brewmaster with extensive experience atboth small breweries, worldwide, and with the world's largest, Anheuser-Busch InBev.  Wolfe is a 20-year beer industry member, who was with Anheuser-Busch as well, prior to joining Kuplent in founding Urban Chestnut. 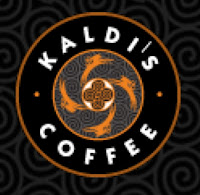 Kaldi's Coffee Roasting Company
St. Louis' local award winning artisan coffee roaster
"Kaldi’s Coffee is dedicated to creating a memorable coffee experience for our customers and guests, committing to sustainable business practices, providing educational opportunities, and supporting the communities that we serve. It is our mission to exceed competition and continue company growth by executing the above fundamentals. Kaldi’s Coffee will strive to develop team members, build our brand, and promote our products." - Kaldi's Website