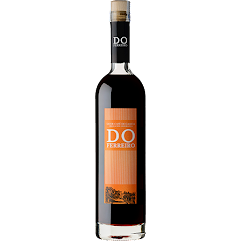 Do Ferreiro Licor de Café de Galicia...$52.99
Do Ferreiro was founded in 1973 and is currently run by Gerardo Méndez with his son, Manuel and daughter, Encarna. Alongside their world class albariño production, they have also been working tirelessly for the last twenty years to resurrect an ancient family tradition of producing handcrafted Galician spirits. Do Ferreiro produces their brandy from a vineyard more than 250 years old, the source of their world-famous Cepas Vellas albariño. This brandy is the base for their IGP designated Galician liqueur Licor de Café.

Do Ferreiro’s Licor de Café de Galicia is a fragrant coffee liqueur made with only the best ingredients. The base distillate, Orujo de Galicia, is made from the pomace of Cepas Vellas albariño. The low yields of these incredibly old grapevines naturally limit the annual production. Do Ferreiro double distills their pomace in an alquitara, a primitive still most often used in Spanish brandy production, diverting some of this distillate to make the regionally famous Licor de Café. This aromatic brandy is then macerated with Jamaican Blue Mountain coffee and sugar for three months before being lightly filtered and bottled – a perfect blend of spirit and coffee.

Flavor Profile: The wild, vegetal flavors of the Orujo de Galicia are not shy, providing a flavorful pairing for the rich espresso of the Blue Mountain coffee. An intense aroma of espresso crema, almonds, orange marmalade and black sesame seeds. The palate has the prickly, playful texture of albariño pomace brandy, softened by the careful application of sugar and coffee tannins.

Usage Notes: Traditionally served chilled as a digestif, on ice, or with a cloud of whipped cream, Licor de Café can also offer an intense coffee boost to high end cocktails. Make a luxurious espresso martini or affogato and let its flavors sing.