What is Pox?
Pox, a spirit unique to the Tzotzil Mayans of Chiapas, is a symbol of indigenous resistance. In the 16th century, the natives of Mexico's most Southern state fought back against Spanish missionaries, and as a result, preserved much of their Mayan culture—including the use of pox in ceremonial rites.

According to mixologist Carlos Eduardo Ruiz, the use of pox (pronounced posh) as a bar ingredient is a new phenomenon, as it was originally used for its medicinal and magical properties by h’iloles—healers—and spiritual guides.

While the spirit has begun to appear in more and more (hip) bars across Mexico, Pox is still relatively hard to come by—though it's widely available in Chiapas bars in the cities of Chamula, San Cristóbal de las Casas, and Zinacantan. Only six years have passed since Chiapas allowed for pox to be sold outside of the state, and the spirit has just begun distributing to California, Texas, Nevada and Washington. You can find it in high-end bars like Limosneros and Toro, both in Mexico City, and at Encanto Camino in Tulum." - Food and Wine Magazine
"Pox (pronounced “pōsh”) is an ancient beverage of the Mayan culture in Chiapas, produced from grain and sugarcane. In the Mayan language, Pox means “medicine” or “healing”, and the spirit is still used in ceremony and ritual today.

Siglo Cero was created in collaboration with the indigenous Mayan community in Chiapas, and has a deep commitment to preserving the heritage it represents. All the corn used is sustainably grown by Mayan farmers, with a mission to preserve the heritage strains of corn endemic to the area. The sugarcane and wheat, likewise, are locally and sustainably sourced." -- importer 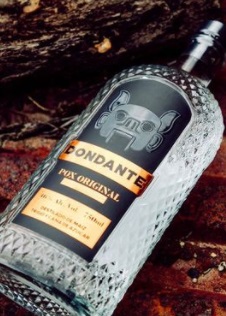 Dondante Pox Original...$39.99
46% ABV
Macerated with corn black as night, releasing his spirit of wisdom to an earthly world
"First, sugarcane is crushed, juiced and boiled to create piloncillo (like a sticky brick of raw brown sugar). Meanwhile, four different heritage varieties of corn (white, red, yellow and black) are dried, husked and ground. Next, wheat bran is placed in a large wooden fermenter, and local spring water is slowly introduced. Finally, the ground corn, piloncillo and additional fresh sugarcane juice are added to the vat, where natural, spontaneous fermentation occurs over 10-18 days. The mash is distilled twice, using wood-fired copper pot stills, and proofed to around 42% ABV (proof will vary slightly from batch to batch). The final result is savory on the nose and palate with notes of ancho and guajillo chiles, esquites, dried coconut, and baked corn husk. A fascinating experience! " - importer
Posted by Paul Hayden at 8:13 AM