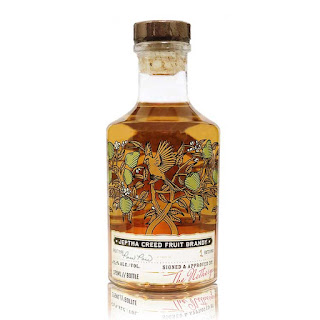 Jeptha Creed Fruit Brandy Paw Paw...$47.99 / 375ml
Refreshing, fruity, and unlike anything else. Our Paw Paw Brandy was expertly distilled from fresh, locally grown pawpaw fruit. 95 proof.
What Is a Pawpaw, and Why Is It So Magical?
The green fruit tastes tropical—like a cross between a banana and a mango—but, surprisingly, is indigenous to the Mid-Atlantic.
Ah, mid-September in Pennsylvania—apple trees are popping with ripe red and green and yellow fruit, late tomatoes are prime for picking, and pumpkins are getting close. And, farmers are also starting to harvest another crop: the pawpaw. And while its bright flavor might remind you of something tropical—it tastes like a cross between mango and banana—it’s actually indigenous to North America. The oblong, green fruit has been around for hundreds of years, growing in swaths of the Mid-Atlantic, South, and Midwest. They were cultivated by Native Americans, and, allegedly, George Washington loved eating them for dessert, chilled. So then why have so many people never heard of a pawpaw?

It’s not a huge surprise, says Nina Berryman, the farms manager for Weavers Way, Philadelphia’s largest food co-op and the only one with its own farm. She often hears people, even life-long Pennsylvanians, ask what it is.

“It’s so ironic, because it’s one of the few native fruits that we grow for food on our farm,” she says. Persimmons, kiwiberries, blackberries, and Asian pears also grow on the farm, but none are native. Apples grow in orchards all over the state, but also aren’t originally from North America—they’re native to Asia and were brought to the U.S. by European colonists.

Berryman grew up in Vermont, where the climate was too cold to grow pawpaws. She learned about them when she started working at Weavers Way over a decade ago, and the Philadelphia Orchard Project, a non-profit that supports orchard design and plant sourcing for community groups, suggested she plant some. The small, shrubby trees have long, broad leaves, purple flowers in the spring, and usually, in Pennsylvania, are ripe in September. Inside the greenish-yellow exterior, the pale yellow flesh is soft and custard-y, with fat, nickel-sized seeds.

According to the farmer, there’s a simple reason why the pawpaw isn’t as ubiquitous as the apple, one that has nothing to do with its folksy name. “It just doesn't travel well, so it doesn't fit well into our conventional, large-scale agricultural system that ships food across the country, and across the globe,” she says. Like heirloom tomatoes, the fragile fruit is picked when it’s soft and ripe, so will typically only be found in farmers’ markets.

Food and Wine
Posted by Paul Hayden at 11:06 PM