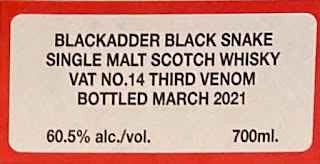 Blackadder Black Snake Single Malt Whisky...$74.99 / 750ml
Black Snake is produced from a Vatting of casks finished in a Single Butt. It starts its life in first-fill ex-Bourbon casks. We then put three of them into new Oloroso or PX butts and leave for around a year for further maturation before bottling two thirds of the cask. We call these “Vats” as they are a kind of mini Solera. After each bottling we add two more ex-Bourbon casks, always of the same whisky, and leave for around another year before again bottling two thirds of the Vat. All future bottlings from each vatting of Black Snake will therefore contain some spirit that was in previous expressions from the Butt. From time to time the Butt is renewed. Each edition bottling of Black Snake is called “Venom”, as in a snake’s poison. A touch of Blackadder humour! The first bottling from each Vat is called “First Venom”, the second “Second Venom” and so on.

Blackadder The Legendary 20 year Single Malt Scotch...$119.99 / 750ml
Many whiskies have legends created and crafted around them and we thought that Blackadder should be no different – after all, we are selling Scotland’s legendary spirit!
This is our legend of Blackadder...
“Long, long ago, in days since hidden by the swirling mists of time, the trusted sword of Blackadder went fourth and vanquished the dark forces of evil and justly ruled over the lands of Northern Scotia.”

Blackadder Raw Cask Panama Rum...$129.99 / 750ml
63.2% ABV
Bottled Nov 2020
As good as whisky is, there are also other spirits to be discovered. Over recent years, we have focussed on developing a unique range of rums under our Raw Cask trademark. Just as our Raw Cask whiskies offer the fullest possible cask flavours in each bottle, so our Raw Cask rums share the same broad spectrum of exquisite tastes.
Posted by Mike at 5:18 PM