Foursquare Rum Distillery is located on a former sugar plantation that dates back to 1636 within the tiny Caribbean island of Barbados. Founded by the Seale family, distilling operations and blending are currently directed by Richard Seale, 4th Generation Trader/Distiller.
Exceptional Cask Selections represent the unique, and rare offerings of Foursquare Rum Distillery that Richard Seale has hand selected – his personal aging experiments only released when he feels they are of exceptional quality. These are one of a kind expressions, available for a limited time, and showcasing truly unique approaches to both Rum blending and maturation. Their releases have garnered a number of awards including the 2016 Rum Producer of the Year, A Trophy Award in the Rum Category, Two Gold Medals, and a Silver Medal at the 2016 International Spirits Challenge. Always with No Sugar, and No Additives. A paragon of the potential in Rum.

Aging: All maturation occurs in Barbados, in open wall warehouses, allowing further influence from the tropical climate. This accelerates the maturation process by 2-3x from that of a temperate climate, with 5-8% loss occurring annually. The backbone of Foursquare Rum Distillery’s aging operations are Ex-Bourbon barrels, however Richard has collected a wide variety of unique and rare barrels – from former Cognac, Port, Zinfandel, Sherry, Madeira barrels and more – allowing for either subtle nuances or bold character as desired. 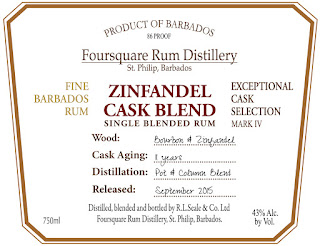 
Raw Ingredients: Molasses produced from sugar production in both Barbados and Guyana.
These rums are made from a blend of rums from both traditional twin column coffey and artisanal copper pot stills. This is very rare in the Caribbean. Richard Seale uses both because they produce a rum superior to using either method on its own. The pot still gives the rum good complexity and depth of flavor while the twin column coffey allows the final blend to have a more balanced aroma and flavor.
The pot still is made completely of copper.
The column still is comprised of 3 columns 20 feet in height. Its shell is made of stainless steel and all of its interior surfaces are made of copper.

Foursquare 2004 Single Blended Rum...$61.99
Aged for 11 years in Bourbon Barrels
Exceptional Cask Selection Mark III: 2004 Single Blended Rum
This selection has been aged for 11 years in Ex-Bourbon Barrels, and is comprised of a blend of both Artisanal Copper Pot and Traditional Twin Column Coffey distilled Rums.
Bottled at Cask Strength, 59% ABV – this expression has immense depth in flavor and aroma, further captured by it’s higher proof point. Best enjoyed similar to a great Scotch.
Posted by Paul Hayden at 3:16 PM