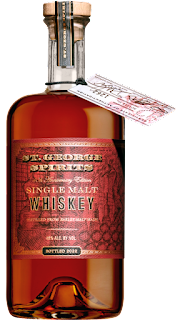 In preparation for this one-time-only release, head distiller/blender Dave Smith spent months meticulously working through our library of casks. Of the 600+ we sampled, only 30 made the initial cut, and we ultimately selected a mere 14 casks to create the whiskey that went into bottle.
In the words of master distiller Lance Winters: “Our 40th Anniversary Edition Single Malt Whiskey represents the cumulative experience of 40 years of boundary-pushing distillation, as well as our decades-long love affair with making single malt. It's the pure essence of passionate self-expression—and it's also delicious.” Not that he’s biased.

The mash bill for the 40th Anniversary single malt is the same one we have used since we started laying down barrels in 1997: 100% two-row barley at five precise roast levels: pale malt, crystal malt, chocolate malt, black patent malt, and alder/beechwood-smoked malt that we get from Bamburg, Germany. What sets this whiskey apart from our annual Lot series releases is the special quality of the casks we used to make it. For more on that, read on.
Posted by Paul Hayden at 8:10 PM