Aged 9 months in Whiskey Barrels
Our 2019 Rolling Thunder Imperial Stout was aged for 9 months in hand made Rolling Thunder Barrel Works barrels previously used to age our Dead Guy Whiskey. This limited, one-of-a-kind imperial stout can be enjoyed right away or cellared for years, but either way it's best shared among friends.
Ingredients: We skipped the fruit this year to let the stout and whiskey barrel shine. Rich, viscous notes of chocolate coffee combine flawlessly with the flavors of whiskey-soaked Oregon oak. 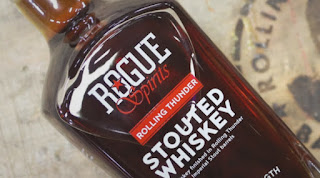 Rolling Thunder Stouted Whiskey is a first of its kind. It’s made with barley grown on Rogue Farms and distilled from a wash that began as Dead Guy Ale, brewed right next to the distillery in Newport, Ore. It was first aged one year in new Oregon Oak (Quercus garryana) barrels crafted at our Rolling Thunder Barrel Works before aging two more years in barrels that had previously aged Rolling Thunder Imperial Stout. Rogue grains, beer, whiskey, barrels and the magic of Newport’s marine climate make this American Single Malt as unique as the hands that crafted it.