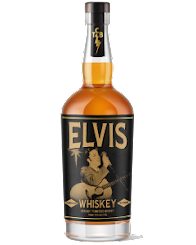 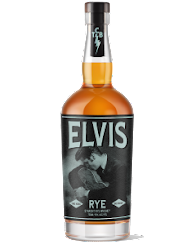 Elvis Presley The King Straight Rye...$39.99
THE KING
Elvis Presley has long been hailed as the undisputed King of Rock & Roll. Beginning in 1954, his music, his style and his scandalous dance moves took the country by storm and continued to reign for decades influencing many other artists, including The Beatles.

“Nothing affected me until I heard Elvis. Without Elvis, there would be no Beatles” ~ John Lennon

Soft amber in color, with an aroma of sweet rye grassiness upfront, followed by hints of citrus and apple. Flavor notes of toasted oak, butterscotch, vanilla wafers and a soft hint of pepper lead to a beautiful, sweet, complex finish with creamy mouth feel. Mash Bill: 95% Rye, 5% Malted Barley. Elvis Rye is sourced and blended by an expert team of industry veterans and bottled in Tennessee, where Elvis began his career and called home. 90 Proof.

Elvis Presley Tiger Man Tennessee Whiskey...$39.99
TIGER MAN
Elvis Presley was a man of many nicknames, including Tiger Man, the King of the Jungle. Some say it was his dad who first called him Tiger Man, some say it was a fan, either way the name was a perfect fit. Elvis first performed the song, Tiger Man in concert in Las Vegas in 1969 and continued playing it

Old gold in color, with an aroma of toasted oak and sweet corn with a hint of citrus and apple. Flavor notes of sweet-toasted maple, roasted creme brulee, and subtle notes of a granny smith apple and caramel lead to a very balanced, long, soft, sweet and genuine great finish. Mash Bill: 80% Corn, 10% Rye, 10% Malted Barley. Elvis Whiskey is sourced and blended by an expert team of industry veterans and bottled in Tennessee, where Elvis began his career and called home. 90 Proof.