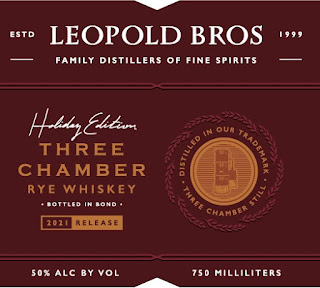 2021 Edition is here!
Leopold Bros. Three Chamber Rye Whiskey...$199.99
A Revival of a Lost American Tradition
For over a hundred years, American rye whiskey was commonly produced in what was called a Three Chamber Still to extract not only distillate, but also oils and aromas hidden in the grains. The resulting spirit was marketed as “heavy-bodied” whiskey, but production stopped just after World War II and the still in which it was made became a lost American tradition.


Leopold Bros. painstakingly re-engineered a Three Chamber Still from old manuscripts and grew the heritage grain Abruzzi rye that was favored by Pre-Prohibition distillers to resurrect this one-of-a-kind whiskey.

Info on the previous bottling
The Collector’s Edition is the first bottling of our Three Chamber Rye Whiskey and is hand-signed and numbered by Todd Leopold. Only 5,280 bottles of this unique first bottling will ever be produced.
We hope you enjoy this rebirth of an American classic as much as we enjoyed making it.
From our family to yours. --The Leopold Bros.
read more in Robb Report
Posted by Paul Hayden at 7:47 AM