Fantastic artisanal Soy Sauce
Kishibori Shoyu Soy Sauce...$16.99 / 12oz
"The best stuff we’ve found is Kishibori Shoyu. "Commodity" soy sauce tastes like salt and not much else – but this soy sauce tastes like something you wouldn’t mind eating all on its own. When you pour it onto a spoon you can see that it has a much higher viscosity than the commercial stuff, along with a beautiful amber hue. The scent is floral with a nice bit of earthy porcini funk. Kishibori Shoyu is rich and brothy on the palate, with a saltiness that supports rather than overwhelms its many layers of flavor. It has a meatiness (read: umami) that’s reminiscent of the crust on a well-seared steak.

Kishibori Shoyu is produced by the Takesan Company which was founded by Yoshiji Takebe in at the turn of the 19th century. He chose the small island of Shodoshima for his shoyu company not only because of the ideal temperate climate for fermentation, but also for the regions long history of sea salt production. Today other Shoyu producers have followed suit, and Shodoshima Island has become Japan’s third largest Shoyu producing region.

The Takesan Company still makes their shoyu artisanally, using only the highest quality whole soybeans, toasted wheat, and artisanal sea salt from the surrounding Seto Inland Sea. The production of Kishibori Shoyu is similar to that of the legendary Balsamic vinegar, in that the Takesan Company uses American white oak barrels (some of which from when Yoshiji first started the company!) to age their shoyu. After the three ingredients go through the “mashing” phase, they are allowed to slowly ferment in the oak barrels for a year. The slow fermentation process creates organic acids that heighten the flavor of the soy sauce, and eliminate the need for the artificial preservatives and alcohols found in the commercial stuff. After a year of aging in the oak barrels, Kishibori shoyu is filtered, pasteurized, and bottled.

Because this soy sauce is so special, it should be treated a little bit differently. We’d recommend using it to finish a dish, or as a great dipping sauce with fresh chives and a bit of extra virgin sesame oil. It would take the super simple dinner of rice with a fried egg on top to the next level. While we recognize that the refrigerators of cooks are often overstocked with the condiments of the world – this is another one you shouldn’t have to live without." - importer 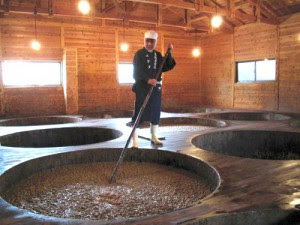 Soy sauce, also commonly known as shoyu, is the best known flavor enhancer in Asian cooking. Made the old-fashioned way — through a careful fermentation process that can take as long as 18 months — it’s a healthy and nourishing product.

The best quality, truly healthy soy sauce is not only fermented in a traditional manner but also unpasteurized to retain beneficial enzymes and nutritional cofactors.

The most common soy sauces sold in supermarkets and served at the majority of restaurants are made in two days or less. Here’s how they do it -- click to read the full article.
Posted by Paul Hayden at 1:49 PM