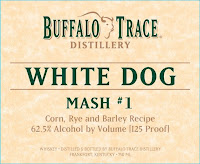 Buffalo Trace White Dog Mash #1....$14.99 / 375ml
"In Kentucky, buffalo carved a pathway followed by America's first explores. Those brave pioneers distilled whiskey using traditional methods and drank it right off the still. They called it White Dog. This raw distillate was clear, un-aged and had a hint of sweet corn. Later distillers discovered this spirit was perfect for aging--creating what we know today as fine Kentucky Straight Bourbon Whiskey. We're still making whiskey on the spot where ancient buffalon once crossed the Kentucky River and following centuries of time-honored distilling tradition. Enjoy this White dog the way Americans did more than 200 years ago." -- Buffalo Trace 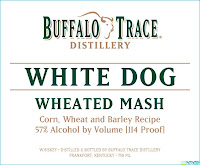 Buffalo Trace White Dog Wheated Mash...$14.99 / 375ml
William Larue Weller was a distilling pioneer. He took a traditional bourbon recipe and substituted wheat where rye was normally used. This created a soft mellow spirit perfect for sipping. Before this whiskey ever made its way into the barrel froom for ageing it was drunk straight off the still. It was called White Dog. This raw distillate was clear, un-aged and hinted of wheat and sweet corn. Enjoy this wheat recipe White Dog the way William Larue Weller and early Americans did more than a century ago. 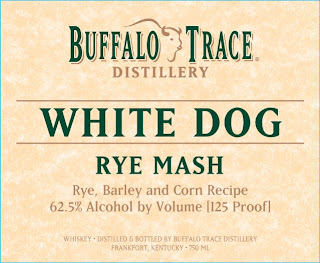 Buffalo Trace White Dog Rye Mash....$14.99 / 375ml
Dating back to George Washington and the birth of a nation is a proud history of crafting whiskey. Some of the first whiskey distilled in American was Straight rye. Keeping with traditions of America's founding fathers, Buffalo Trace Distillery offers this raw, clear, un-aged and high-proof distillate right off the still. The taste has a hint if spicy rye. This whiskey is known as White Dog. It was later discovered this spirit was perfect for ageing and gave way to what we today know as Straight Rye Whiskey. Enjoy this White Dog the way early Americans did more than 200 years ago.