In stock and online 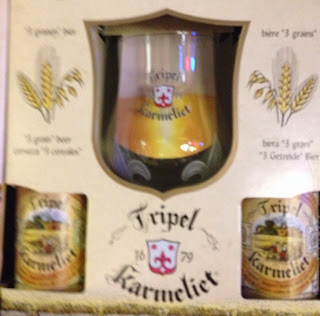 Karmeliet Tripel with 4 beers and Karmeliet special glass....$28.99
First brewed 1996; claimed to be based on a recipe from 1679 which used wheat, oat and barley.
Tripel Karmeliet is a very refined and complex golden-to-bronze brew with a fantastic creamy head. These characteristics derive not only from the grains used but also from restrained hopping with Styrians and the fruity nature (banana and vanilla) of the house yeast. Aroma has hints of vanilla mixed with citrus aromas. Tripel Karmeliet has not only the lightness and freshness of wheat, but also the creaminess of oats together with a spicy lemony almost quinine dryness.