A total of 11 barrel aged beers so far as part of the program!


We have 4 more barrels in the works!! 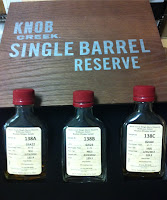 We just tasted through some Knob Creek barrel samples and placed an order for our second barrel of Knob Creek.   We also have barrel samples of Elijah Craig (2nd barrel), Buffalo Trace (our 4th) and Blanton's Bourbon (our 1st Blanton's) on the way to order our own barrels.